Favorite Dishes and Recipes by Mom

Mom’s Home-Cooking Was (and Still Is) The Best

I’m often asked “what is your favorite dish?” My answer is — whatever my mother makes! Our family favorite was Mom’s Chinese Spaghetti. Working full-time as a public schools teacher and with a limited authentic Asian grocery selection in Smyrna, GA back in the 1980’s, making Asian-American-Southern dishes with a fusion twist was the norm in our household. Other favorites included: Hot Hunan Catfish and Pepper Steak and Rice a-a-Roni. Spaghetti was easy and convenient. You can use any noodles you have on hand– regular or whole wheat spaghetti, linguine–any shape, really. For a special treat, enjoy with fresh Asian-style yellow lo mein noodles (sold in refrigerated or frozen section of Asian groceries and some large supermarkets) or buckwheat soba noodles. This is a home chef adaptation of Shanghai Spicy Noodles. It’s all yummy.

Different from traditional Italian tomato-based sauce, the Chinese Spaghetti meat topping is surprisingly full of finely chopped vegetables like cabbage, carrots green onions, garlic and sometimes celery. You can easily do a vegetarian or tofu tempeh version. It’s a great way to “sneak in” veggies with pasta which can be handy for little ones. Scrumptious mild or spicy. It’s delicious with chopped Vidalia Sweet Onion, cabbage, celery, zucchini simmered 20-30 minutes in with the sauce. The key is finely chopping the vegetables into bits (easiest in food processor) so it’s saucy and flavorful as part of the sauce rather than being a chunky stir fry.

Noodles carry a lot of symbolism in Chinese culture and represent longevity so long-life noodles are featured on birthdays. Twirl and slurp but don’t cut your birthday noodles! We even made a Chili Spaghetti version of this with beans and served it up at a local Chili Cook-off. It was a hit with all ages.

We hope you enjoy this recipe as much as we do at home.

In celebration of Mother’s Day, WHAT IS YOUR FAVORITE DISH OR RECIPE BY MOM ? 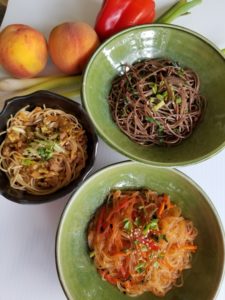 Noodles have been a staple food in many parts of the world for at least 2,000 years. Did you know that a 4,000 year-old bowl of noodles was unearthed in northwestern China, made from two kinds of millet, cultivated 7,000 years ago! China claims the earliest historical account of noodles. Wheat flour and some noodle technology came from the Middle East, and Italy popularized pasta to the rest of the world.

Noodles were first referred to as “soup cake” in Chinese culture. Different references in the language apply to wheat and dough, so the “cake” implies dough, like a dumpling. “It probably started as a dough ball or chunk that was steamed or boiled and eaten in soup or a broth. Then maybe they decided to roll, pull and cut it. The rest is history!”

Arab merchants first journeyed to the Guangzhou province in China in the fourth century and established trade routes between Asia, India, Africa and Europe. Experts widely agreed that is how the noodle made its way to Europe. Historians also peg the first production of dried noodles to fifth-century Arabs, who were looking for portable sustenance for long journeys along those busy routes. Wheat flour also originally came from the Middle East. It was the Italians, however, who popularized pasta for the rest of the world.

The main distinction between Asian noodles and European pasta is the source ingredient. With Asian noodles, there’s much more variety in what we make them with. The shape isn’t really the focus. Asian noodles may be made from wheat flour, rice flour, millet, mung bean, buckwheat, sweet potato flour or a combination of them. The majority of Asian noodles are fashioned into strands that can be long, short, thick, thin, straight, curly or wrinkly.

We hope you enjoy this recipe as much as we do at home!

In small bowl combine all sauce base ingredients plus water, except chopped onion. In large skillet or wok, heat 2 T oil on medium until hot, add most of your green onions (leave a little bit for garnish), pepper, salt, saute 30 seconds. Add ground meat, saute and break into little pieces until barely pink, about 3 minutes. Add sauce base to meat in pan. Mix and cook another 2 minutes until meat is done/brown and sauce is bubbly. Simmer low 5 minutes.

While meat mixture is simmering, in separate skillet, heat 1 T veg oil, saute garlic, ginger, and vegetables 2 minutes. Combine with meat sauce in larger pan. Simmer together low, uncovered about 10-15 minutes until meat and vegetables mixture is bubbly and sauce has thickened a bit.

How to Make an Asian Tropical Fruit Salad (Video)

Look Good and Taste Good I love sharing and learning about new fruit and vegetables, like this tropical fruit salad.…

Favorite Snacks: From Taiwan to Georgia What are my mom's favorite snacks? Marbled tea eggs, Georgia boiled peanuts (a bit…