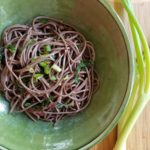 Buckwheat noodles are nutritious and wonderful hot or cold. Good tasting and good for you noodles! Buckwheat noodles are not made from typical semolina flour. Interestingly, buckwheat is not related to wheat or a grass. It’s cultivated for it’s grain-like seeds! The seeds are highly nutritious with a rich assortment of vitamins and minerals and contain no gluten. Buckwheat flour and noodles have been eaten in mountainous regions like Tibet, northern China and Japan for centuries and enjoyed in soups, stir fries or chilled. This is an easy “light” noodle dish, great for starters.

Noodles have been a staple food in many parts of the world for at least 2,000 years. Did you know that a 4,000 year-old bowl of noodles was unearthed in northwestern China and were made from two kinds of millet, cultivated 7,000 years ago!? China claims the earliest historical account of noodles. Wheat flour and some noodle technology came from the Middle East. In addition, Italy popularized pasta to the rest of the world.

Noodles were first referred to as “soup cake” in Chinese culture. In the Chinese language uses different references that apply to wheat and dough, so the “cake” implies to dough, like a dumpling. “It probably started as a dough ball or chunk that was steamed or boiled and eaten in soup or a broth. Then maybe they decided to roll, pull and cut it. The rest is history!”

Arab merchants first journeyed to the Guangzhou province in China in the fourth century and established trade routes between Asia, India, Africa and Europe. Therefore, Experts widely agreed that is how the noodle made its way to Europe. In addition, Historians also peg the first production of dried noodles to fifth-century Arabs, who were looking for portable sustenance for long journeys along those busy routes. For instance, Wheat flour came from the Middle East. However, It was the Italians who popularized pasta for the rest of the world.

The main distinction between Asian noodles and European pasta is the source ingredient. Most importantly, with Asian noodles, there’s much more variety in what we make them with. Therefore, The shape isn’t really the focus. In addition, Asian noodles may be made from wheat flour, rice flour, millet, mung bean, buckwheat, sweet potato flour or a combination of them. In conclusion, the majority of Asian noodles are fashioned into strands that can be long, short, thick, thin, straight, curly or wrinkly.

Going to an Asian market soon to pick up the noodles? Here are a few quick tips on choosing the best noodles for your dish!

Boil/drain noodles according to pkg directions. Mix oil and seasonings together then toss hot noodles in. Chill/marinate for 1 hour. Serve garnished with scallions.

This Asian Ramen Noodle Soup recipe will warm you heart and your stomach. This dish uses delicious flavors, healthy ingredients,…

Go Farm to Wok with our best home chef tips for the perfect stir fry! Includes step-by-step recipe video with…