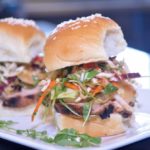 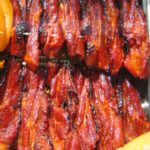 Chinese and Southern chefs love pork. In addition, Chinese barbecue pork (char siu) is a popular way to prepare pork in Cantonese cuisine, and seasoned with honey, soy sauce and five-spice powder. You’ll often see racks hanging in Chinatown deli windows. Southeast Asia has similar “char siu”, literally meaning “fork roasted” with roast pork and roast duck. Japan has its own version that is rolled then braised rather than roasted.

Pork is versatile and easy to prepare with plenty of moisture and fat. One can be more forgiving on cooking time and culinary skills (vs. chicken, fish, beef, even shrimp). The various cuts star in:

While I enjoy BBQ chicken, especially the dark meat leg and thighs. However, I am aware of certain religious prohibitions of eating pork, yet there’s nothing quite like the taste of barbecue pulled pork or pork ribs.

Growing up in the South, my parents did their best to strike a balance and highlight the best of eastern, western and southern traditions. Assimilate, remember your heritage; be adventurous and open in making new friends or eating new foods. Food and cultural intersections were everywhere. In the Atlanta tennis leagues, home teams provide the food and drink. Food choices distinguish teams by neighborhood, not unlike the Mason-Dixon line. Healthy hummus and salads (Northside Women B2), catered barbeque pork sandwiches (Midtown Men AA) and Southern fried chicken (Mixed Doubles A6).

One time, an African- American team hosted my team, a motley crew of Asian, Black and Mexican players. They brought barbeque chicken. I couldn’t wait to try some. But my match went long and by the time I finished, everyone else had eaten. All that was left were cold, unwanted chicken breasts. Many ethnic groups prefer dark meat, which results in chicken thighs being more expensive than chicken breasts in an Asian or international grocery store.

These sliders are a scrumptious combination of the savory, smoky flavors of the pork with crunchy sweet and tangy flavors of the slaw. The fresh pineapple and garlic in our Wild Wild East Asian BBQ sauce/marinade are natural meat tenderizers. You can also cut and cook the loins in a crock pot or slow cooker. Feel free to substitute rotisserie or baked chicken for the pork. Kids love it too! No worries, it’s natural with no MSG or junky high fructose syrups. It’s all goo 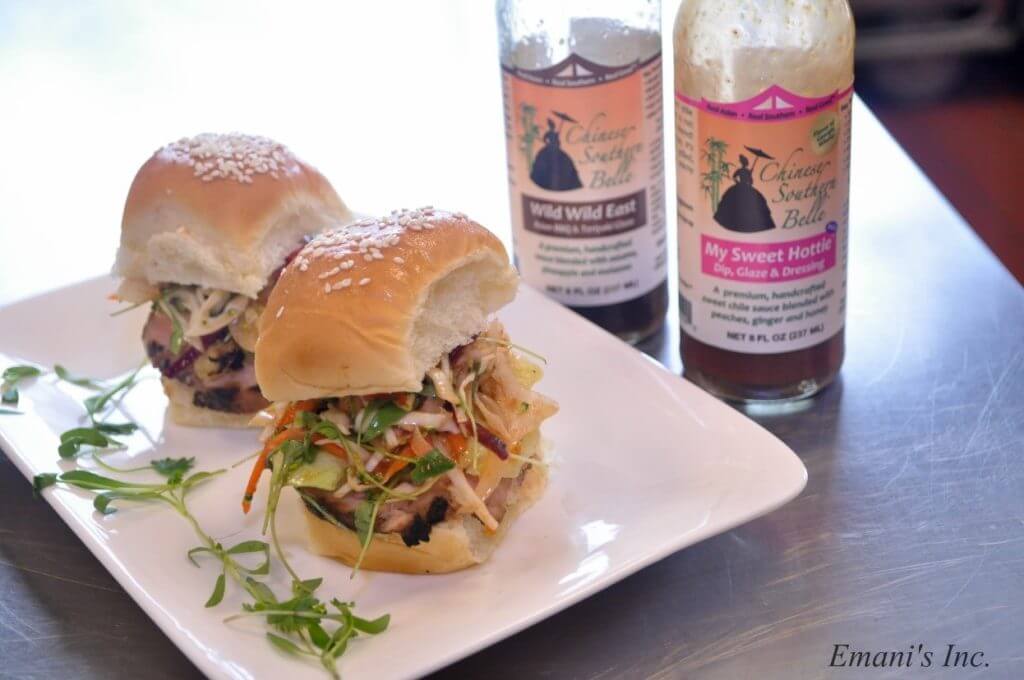 Marinate pork tenderloin in half bottle of the Wild Wild East sauce, (reserving 2 oz. to brush on pork while grilling and 2 oz to drizzle on after slicing). Coat the loin well, cover and refrigerate overnight, or at least 4 hours. Preheat oven to 325 degrees. Bake in the preheated oven for 25 minutes per pound, or until the internal temperature reaches 145 degrees F. Baste the pork occasionally while cooking. Let rest 10-15 minutes before slicing for moisture retention. Grill the pineapple slices and set aside. In a bowl, mix the slaw mix, Vidalia Sweet Onion, cilantro and 1 cup My Sweet Hottie sauce/dressing. Assemble the pork slices and slaw onto slider rolls.

Spring Rolls for Any Season

Homemade spring rolls are so good, it’s worth the effort! Directly translated from Chinese Mandarin, "spring rolls" often marked the…