“That’s terrible. Do you get cheated on presents?” Chalk up another negative reaction to a holiday birthday!  It’s funny how folks are either delighted or downright negative when they find out that I’m a Christmas baby.

I didn’t think it was a bad thing growing up–my family would give me extra gifts and my sister would make me any homemade birthday cake of my choosing (carrot cake!) She was the only one in the family who ever used the oven. Mom used it for storing pots and pans.

I guess they felt bad that my birthday was easily forgotten since it was during winter break and I’d never celebrate a traditional birthday party. Poor Natalie, who would RSVP to a party on Christmas Day!? Nowadays with a diversity of friends and religions, not everyone celebrates the same way, but still, it wasn’t gonna be a happening scene!

As the story goes, my mom went into labor and had to drive herself and my non-English speaking grandma to fetch my dad at the neighborhood park. He was playing football with the guys. No time to change, he arrived at the hospital, according to my mother “covered in mud and wearing cleats!”  Since I had two sisters already, everyone predicted by hunch or hope–or both–that I was going to be a boy. A third girl is considered unlucky in Chinese culture. Scary to think about but in reality, as the third girl, I wouldn’t be alive today if I had been conceived in mainland China. Understandably, my dad didn’t believe the doctor’s news at first.

My Chinese name means “in the heart, a brother.”

Funny, I didn’t feel “unlucky” or limited by being a girl. Dad showed me how to shoot a gun and Mom and I loved hosting dinner parties. She would always make me “long life” birthday noodles! Blue jean overalls hung next to lacey dresses and I could dream about becoming a dancer or a doctor. But at the end of the day, I didn’t bear the responsibility or burden of being a male heir or son in a traditional Chinese or Southern family.

I would always be Daddy’s girl…and I still am! 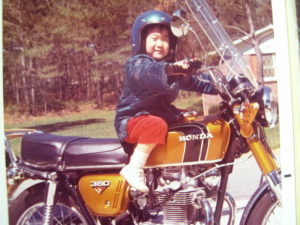